What can a single guy teach us about marriage? What is the secret to happiness? How can we make small changes that will radically improve our relationships?

In this podcast episode, Joe Sanok speaks Roger Nygard about his documentary “The Truth about Marriage”. 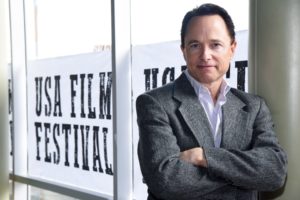 Roger Nygard has directed TV series such as “The Office,” and “The Bernie Mac Show” and he has edited Emmy-nominated episodes of “VEEP” and “Curb Your Enthusiasm” and “Who is America?”

As an award-winning documentarian, Nygard has tackled topics like “Trekkies,” “The Nature of Existence,” and now “The Truth About Marriage.”

How Roger got into his work

Roger loves to laugh, laughter keeps him sane. He gravitated towards TV shows and even his documentaries are essentially comedies. Roger looks for the humor in humanity and this comes through in his work.

Using humor to get your point across

These documentaries are first & foremost entertainment but underneath there are really important core values that we all hold because we’re social creatures.

This was the main reason for this project. Roger set out to fix himself, to learn about himself. We’re all doing something wrong. There’s no class in school that teaches us how to have happy and healthy relationships, so how do we learn to? Roger wanted to do better, to break the cycle. He was sabotaging his relationships without realizing why or how he was sabotaging them.

Tips for getting to know and develop yourself

These little changes in behavior can change the trajectory of your relationship drastically.

The biggest problem is that we don’t recognize what our partners need, someone needs to tell us. Generally, women need 20-30mins a day when they are genuinely recognized and listened to, and men need freedom and disconnection. Roger suggests ways to try this out for a week and see how it can change our relationships.

If you know the rules going in, you’re going to have a much better chance of making it than if you go in unknowing and there’s a lot of surprises and shock and potential disappointments awaiting you.

What can therapists do to encourage beneficial discussions around race going on in their practices? How can you be a genuine ally? What does…