In this podcast episode, Joe Sanok speaks to Adam & Kerry Anderson about their entrepreneurial journey over the last 14 years, how it nearly destroyed their family, and how they overcame it.

Whether you are a seasoned clinician who’s current website needs to be revamped, or a new therapist building a website for the first time, Brighter Vision is here to help.

By first understanding your practice and what makes it unique, Brighter Vision’s team of developers will create you a custom website catered to your specific marketing goals. Better yet, they provide unlimited technical support to make sure it stays updated, and professional search engine optimization to make sure you rank high in online searches – all at no additional cost.

Click here to access the course on how to transition to a telehealth private practice during COVID-19. 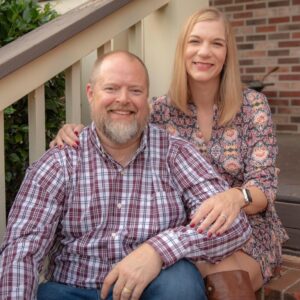 Kerry Anderson is Chief Family Officer at Whole Life Entrepreneurship. Kerry left her career as a pediatric nurse to be a stay-at-home mom when her husband Adam (a serial entrepreneur) began spending more time traveling for work. This lifestyle quickly took its toll on their relationship.

Under the stress of their crumbling marriage, Kerry and Adam sought counseling, meanwhile developing their own business-based methods for rebuilding their relationship. Today they’re on a mission to share what they’ve learned, supporting other entrepreneurial couples as they navigate the chaotic world of marriage and entrepreneurship.

The start of Adam & Kerry’s journey

Fourteen years of entrepreneurship really took its toll on their relationship and their family. Entrepreneurship has some very specific stressors that can add to the stress that the families are under. It got really bad and ugly for Adam & Kerry but they came out the other side and learned a lot of things along the way. They have become very passionate about sharing those things with entrepreneurs and helping them to create lives of success without regrets, live a life of purpose, and be able to build a business that really matters to them.

Adam was responsible for bringing in the money, while Kerry was at home with the kids as CFO – Chief Family Officer. Kerry ran the house and Adam was away a lot so would parent over the phone via FaceTime, resulting in their 2-year old son calling him “Adam” instead of “Dad” because he was gone so much. Adam became obsessed with the business and Kerry was completely obsessed with the family. They began to resent each other which built really toxic relationships inside the family. They weren’t looking at it from a holistic point of view. Adam’s entire identity became the business so when he came home and the one he wanted to be a giant fan of his wasn’t, it was a real blow, and vice versa. In the beginning, Kerry wasn’t involved in the business at all and felt that the business was the sun and the rest of them revolved around it. They completely built their life around what the business needed. Kerry had to give up her own career to be at home, which she agreed to but it resulted in resentment. They were no longer a priority to each other and it became toxic.

She went and got healthy and was having a great time. And I looked at her for a year, waiting for her to come back to being unhealthy. And she’s like, nope, you’re drowning in the ocean, I’m on the beach. I got a towel laid out next to me, you should totally come and hang out but I’m not going back in the water to drown with you. And she led by example, she led with compassion to lead with wisdom and eventually I clued in that there was a better way.

Kerry called Adam one day and told him that she had decided NOT to leave him which was a huge shock to Adam as he didn’t know that that was even on the table. She told him that she would not leave, she would love him as is but wouldn’t carry on living that was so was going to take the steps to heal and become someone she likes again. Adam didn’t change direction at first, he found it hard to kick the habits, behaviors, and beliefs that were so ingrained in him. He believed that they were there to keep him safe but they were actually the things causing him harm.

They learned that no matter how bad it gets, they can get through it together. They also learned that they weren’t the only ones that this was happening to. After Kerry wrote her book, it became clear that this lifestyle has a particular set of stressors and it’s really hard to get the right kind of help. The stress turned Kerry into someone she didn’t like and THAT person is the one who didn’t like Adam.

What helped Kerry get herself back

A little bit of a lot of things, and a lot of trying to get herself out of the roles she had put herself in for so long. Kerry had to step back and start taking control of her own life and stop blaming Adam and the business. She realized one day that she had lost touch with all of her hopes and dreams and needed to start over. Kerry tried new things and reconnected with her creative self. This ended up giving her a community of creative, supportive people who made her better. Adam saw that Kerry was in this healthy community and slowly gravitated towards it as well. Accidentally on purpose, they became leaders in this community which showed them they had something worth sharing.

Finding a balance between family and business in entrepreneurship

It is shocking how many people, after working so long on something, have forgotten what makes them happy and they’re just on autopilot.

Obsession is also very common with business owners. It takes priority over the care of themselves and the care of those important to them. Adam & Kerry ask people these questions to try to help them get healthy again:

There’s so much to look at, there’s so much to do! You forget that you have a family in the circus with you. People need a methodology, a step-by-step guide to systemize their behaviors. You use business processes and systems all of the time to scale and make your company efficient, why aren’t you doing the same thing in your life?

Click here for the free assessment and email course.

[JOE]:
This is the Practice of the Practice podcast with Joe Sanok session number 458. When you’re in private practice, it can be tough to find the time to review your marketing efforts and make improvements where needed. Whether you are a seasoned clinician whose current website needs to be revamped, or a new therapist building a website for the first time, Brighter Vision is here to help by first, understanding your practice and what makes it unique, Brighter Vision’s team of developers will create you a custom website, catered to your specific marketing goals. Better yet ,they provide unlimited technical support to make sure it stays updated and professional, search engine optimization to make sure you rank high in online searches, all at no additional cost. To get started ,for $100 off, head over to brightervision.com/Joe. Again. That’s brightervisioncom/Joe.

I am so excited that you are here today. I hope that your quarantine time is going well. I know here in the Sanok family, we have maintained our daily walk for, I’ve lost track of the weeks, but we said to our girls that no matter what the weather, we’re going to do a daily walk as a family. And we said this, I first heard it as this kind of sailing term, it might be a camping term, but there’s no such thing as bad weather, just bad clothing. Plaid. Ugh, you know, I hear people talk about how it feels like Groundhog’s Day and you know the same day over and over. And so, no matter how you are living your life, I hope that you’re staying strong, hope that you are doing your best to enjoy this time with your family, and have a positive attitude. I know that a lot of people are dealing with a lot of different things out there. But, you know, hopefully this podcast and thinking about your business is a great distraction/goals/way to help you level up. As I mentioned in previous podcasts, I recently was signed as a Harper Collins author for a book I’m working on. Right now, the working title is “Thursday is the new Friday.” And it’s been a lot of fun to really just sort through what do I think about just the way that I do business in regards to how I work three days a week and have four-day weekends, but then work really hard when I do work, and when do you outsource, and slow down to speed up, and looking at a lot of research. There’s just some really cool things out there and I really can’t wait to share it with you as we get more that we’re going to release. So, we’ll let you know as that grows. wanted to let you know though, if you head on over to practiceofthepractice.com/100kwebinar, that’s the number 100k webinar, and we have all sorts of master classes and webinars coming up that we’re going to be doing. The next one is on June 23, at one o’clock Eastern, 12 Central, 11 Mountain, and 10 Pacific. We’re going to be covering everything you need to know about insurance, and billing, and the software you need. We have Jeremy Zug, coming in from Practice Solutions, to take us through what you need to know about insurance and billing, and I’m really excited about that, you can register for that. We’re also going to be releasing at least monthly free master classes to really help you level up your business. So, make sure you register for that, that’s coming up here soon. And today on the podcast, we have Adam and Kerry Anderson, and they’re talking about how they almost killed their family with their business and their business with their family. So, without any further ado, here is Adam and Kerry.

Special thanks to the band Silence is Sexy for your intro music, we really like it. This podcast is designed to provide accurate and authoritative information in regards to the subject matter covered, is given with the understanding that neither the host, the publisher, or the guests, are rendering legal, accounting, clinical, or other professional information. If you want a professional you should find one.

How do you define your lifestyle first and then structure your business around that? When envisioning your day in business you have to get…