Have you considered hiring a prescriber? What are the benefits of hiring a nurse practitioner into your practice? How do help to boost and improve the quality of client treatment?

In this podcast episode, Alison Pidgeon speaks with Laurie Groh about how to add a prescriber to your practice.

As a therapist, you’re probably too preoccupied with your caseload to want to think about bookkeeping or tax filing. Heard can help you out with that. Heard is a bookkeeping and tax platform built specifically for therapists in private practice that helps you track and improve your practice’s financial health. Regardless of whether you’re a seasoned clinician or are in the first year of your practice, Heard will help you to identify areas for growth and streamline best financial practices for your business.

When you sign up with Heard, you’ll work directly with financial specialists to track your income and expenses, file taxes online, and grow your business. You’ll also receive financial insights such as profit and loss statements and personalized monthly reports. You can say goodbye to poring over spreadsheets and guessing your tax deductions or quarterly payments; focus on your clients, and Heard will take care of the rest.

Plans begin at $149 per month and can easily be tailored to fit your business’ financial needs. Sign up now at www.joinheard.com. 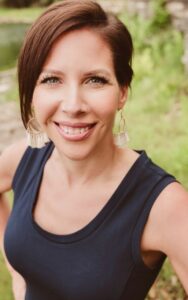 Laurie is a level 2 RLT marriage counselor and the co-owner of Shoreside therapies. Laurie works with individuals that want to improve their relationships — which includes not just marriages, but parent/child, friendship, and co-worker relations. Her typical clients include women who are business owners, perfectionists, and people learning to be more vulnerable. She’s married with 4 little kids, so she also likes working with moms that are trying to juggle it all!

Connect with Laurie on LinkedIn and email her at lgshoreside@gmail.com

The system of having a prescriber on staff

That is something that I think is really important, to have somebody willing to answer those phone calls and get back to somebody right away, because the truth is that most people who are looking to do a contracted position already tend to have a full-time job. (Laurie Groh)

That’s something that a lot of people don’t realize, is that there’s a lot more administrative work with having a prescriber, and you need somebody to handle that. (Alison Pidgeon)

Have the prescriber be on site

Work is busy. Between seeing clients, scheduling clients, taking payments, and running the business, it can become stressful to try to coordinate communication to and from different locations.

Because we’re seeing client after client, and so are they, [it can be] extremely difficult – I find – to communicate with people outside of our practice. (Laurie Groh)

If possible, consider having your nurse practitioner be on-site in your practice to smooth over the prescription and client process.

Use direct communication platforms to stay in touch and solve issues easily.

How nurse practitioners block out their time

Benefits of having nurse practitioners on staff

To me, that is the number one reason to hire a prescriber, that collaboration piece. (Laurie Groh)

Having a staff member on-site who is knowledgeable in the effects of different medications can help boost and embolden the success of therapy, because there is direct communication between the therapist and the prescriber.

Useful links mentioned in this episode:

Check out these additional resources:

Alison has been working with Practice of the Practice since 2016.  She has helped over 70 therapist entrepreneurs start and grow their businesses, through mastermind groups and individual consulting.

Transformation From A Private Practice To Group Practice

Visit Alison’s website, listen to her podcast, or consult with Alison. Email Alison at alison@practiceofthepractice.com

[ALISON PIDGEON] You are listening to the Grow a Group Practice podcast. Whether you were thinking about starting a group practice or in the beginning stages, or want to learn how to scale up your already existing group practice, you are in the right place. I’m Alison Pidgeon, your host, a serial entrepreneur with four businesses, one of which is a large group practice that I started in 2015. Each week, I feature a guest or topic that is relevant to group practice owners. Let’s get started.

Hi, I’m Alison Pidgeon. Thanks for joining me today. We have a great topic for you, we’re talking all about adding a prescriber to your practice. I get this question all the time. As a group practice owner, typically people start a practice and they’re offering therapy services and pretty soon they start thinking about whether or not to add a psychiatrist or nurse practitioner to their practice in form of services that they can provide. So today I’m talking to Laurie Groh, she’s the co-owner of Shoreside Therapies, which is located in Milwaukee, Wisconsin. She’s a therapist and a group practice owner. She also has had a nurse practitioner in her practice for the past few years. So she talks all about her experience with adding that person and how it’s been to have that sort of other line of service as a part of the practice. So if you’ve been thinking about adding a prescriber, definitely listen to this interview and I hope you enjoy. Hi, Laurie. Welcome.
[LAURIE GROH] Hi, Alison. Thanks for having me.
[ALISON] Absolutely. So Laurie is one of the members of our Group Practice Boss community, so I’ve gotten to know her and her practice pretty well. Maybe we could just take a minute to let everybody else know what your practice is all about and give us the introduction.
[LAURIE] Sure. So I am co-owner of Shoreside Therapies. I’ve been in practice for, I think it’s been about 10 years now and my partner and I started just us two and then we brought in therapists after therapists, and then we also decided to hire a nurse practitioner. So we have a prescriber as well. Shoreside Therapies, a I would call it a boutique experience, so we really cater to less clients, more availability. So one of the nice things is that we are available through email, or you can call us, it’s not this like very strict protocol where you can’t get ahold of us if something’s going on.

We try to really be there for our clients. Good news as well, and I didn’t mention this yet, Alison, but we did buy a building. So we’ll have to talk about that. That’s a new thing for sure side and I’m trying to think of other things with shoreside. We see a lot of different clients. We have somebody that works with eating disorders, somebody that works with grief, spirituality, families, kids, borderline personality disorder, OCD. So we have a wide group of people right now. I think we have eight therapists and a nurse practitioner.
[ALISON] Great. Are you self-pay or insurance or both?
[LAURIE] We do a combination, so we take insurance, but we’re out-of-network. So basically we put everything through insurance. The insurance company actually pays the client back versus them giving us a check which makes our bookkeeping super, super easy in comparison to waiting for that check to come from the insurance and adjusting so we feel like it’s the best of both worlds.
[ALISON] Nice. The reason why I wanted to have you on the podcast today is to talk about your experience of hiring a prescriber. I know you said you’ve only had nurse practitioners, but I think this could apply to psychiatrists or nurse practitioners. So how did you get started with that? Where did that come from or how did you find that person?
[LAURIE] That’s a good question. So we decided this was probably after being in practice for a couple years together, that we were struggling for our clients to find psychiatrists that were available without waiting four to six weeks to get in, sometimes longer. Most people now would, would say that that wait time is even longer. So we just wanted basically somebody that we could get in, that a client could get in within that week or two and so we decided to hire a nurse practitioner. At that point we knew nothing, pretty much nothing about that process and what that would look like, who to hire. So we started with somebody, she’s really amazing great personality, fun to be round but she didn’t have a ton of experience in the mental health world.

As a therapist, you’re probably too preoccupied with your caseload to want to think about bookkeeping or tax filing. Heard can help you out with that. Heard is a bookkeeping and tax platform built specifically for therapists in private practice that helps you track and improve your practice’s financial health. Regardless of whether you’re a seasoned clinician or in the first year of your practice, Heard will help you to identify areas for growth and streamline best financial practices for your business.

Thanks so much for listening to the interview today. I hope you learn something new. If you want to hang out with cool practice owners, just like Laurie in our Group Practice Boss membership community, you can join at any time. Go to practiceofthepractice.com/grouppracticeboss. There, you will find all the information. Whitney Owens. I run the group and we help establish group practice owners learn how to level up and problem-solve and support each other. It’s an awesome group of a lot of group practice owners who are real go-getters. So again, if you are interested in joining that group, it’s practiceofthepractice.com/grouppracticeboss. I’ll talk to you all next time.

If you love this podcast, will you please rate and review on iTunes or your favorite podcast player?