Are you in a relationship with the yin to your yang? How can your different roles in the relationship help each other in private practice? Is a good relationship enough to warrant a business relationship?

In this podcast episode, Alison Pidgeon speaks to Brandy and Billy Eldridge about Billy’s work in private practice, Brandy’s work in nonprofit, and their work together on the Beta Male Revolution podcast. 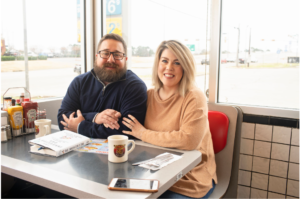 Brandy Eldridge is a non-profit executive director where she and her team provide services for abused or neglected children. She holds a Master’s Degree in Educational Leadership from Park University, and she is currently a doctoral student at the University of Southern California. Brandy is also a consultant and speaker.

Billy Eldridge is a private practice owner and therapist who focuses on working with adolescents and men who would rather be somewhere other than counseling. He received his Master’s Degree in Clinical Mental Health from Texas A&M University-Texarkana, where he is now an adjunct faculty member for the counseling graduate program.

Visit their website and listen to the podcast here.

When you sign up to receive their email course, you will receive a FREE Quiz, which you can take to determine how far along the BETA Male spectrum you are.

You’re in grad school, and you’re about to graduate, and you’re spending late nights in the library, studying and talking and drinking coffee and you’re like, one day, we’re going to have this thing, and this is what we’re going to do in the world. And it’s full of these beautiful ideas. And then you get there and reality has a way of creeping up on you, just like it does in marriage, and you both have to work at it, and be intentional about where you’re going to get there. It doesn’t just happen naturally.

Starting a group practice is not glamorous. We all make mistakes along the way. Billy says that what he did right was go into private practice and what he did wrong was go into private practice. When Billy and his friend graduated, they had the dream and goal of starting a private practice, it has been great and business is good. When you’re starting out, these are things that you don’t really think about but once you’re up and running, it becomes real, fast. So, to defuse any future conflict, it’s good to have everything lined out in the beginning.

Being a director of a nonprofit

The most challenging and most rewarding thing is the people. Brandy was once given the advice that when you hire people, make sure that you hire them knowing that one day you will have to fire them. It’s a dark way of looking at it but she understands that you really have to put the work in before you hire someone. Being in a nonprofit, Brandy’s employees could earn a lot more working somewhere else so she has to look at what else she can give them. What kind of environment? What kind of leadership skills? What can she do to entice them to stay?

They know that if they work at a nonprofit, as a therapist, they’re not going to make as much as they could in private practice. Brandy has to do a lot of leadership training, a lot of shared leadership and empower people. She gives them flexible schedules and finds out what they want in a work environment job so that they stay with her. This really comes down to giving people a voice and listening to what they want.

Between Billy’s practice, Brandy’s nonprofit, and their three kids, how do they balance work and life? How do they find time to spend on their marriage as well?

It’s tricky. Sometimes they do it well and then life usually corrects them when they don’t. When they don’t make time for each other, they can feel the tension. They were both so busy and never found themselves in the same room unless it was parenting. On a whim, they started their podcast together. It has caused conflict which has produced growth, there have been tears and laughter, but they found a shared interest and it was important that they found something that they wanted to do together. They also make time to get out of town at least once a month and try to make time for the kids individually too.

If you’re thinking about or already running a group practice:

[ALISON]:
When it comes to keeping your practice organized, you want software that’s not only simple but the best. I recommend Therapy Notes. Their platform lets you manage notes, claims, scheduling, and more. Plus, they offer amazing unlimited phone and email support. So, when you have a question, they are there to help. To get two free months of Therapy Notes today, just use the promo code “Joe” when you sign up for a free trial at www.therapynotes.com.

Hello and welcome to the Grow a Group Practice podcast. I’m Alison Pidgeon, your host. Today, I have two guests on the show, Brandy and Billy Eldridge, and I’m going to introduce them to you. Brandy Eldridge is a nonprofit executive director, where she and her team provide services for abused or neglected children. She is currently getting her doctorate degree from the University of Southern California. She also works as a consultant and a speaker. Even though she doesn’t run a group practice, she still has a lot of valuable information to share about managing staff and creating a work culture in this interview. And Billy Eldridge, her husband, is a private practice owner and he focuses on working with adolescents and men who he says would rather be somewhere else other than counseling. He also has a group practice, he works as an adjunct faculty member at Texas A&M University, Texarkana, and they are the hosts of a new podcast called Beta Male Revolution which they will be talking about in the interview. So, I had so much fun talking with them, they have a great sense of humor, and… definitely take a listen to this interview.

Billy and Brandy Eldridge, thank you so much for joining me on the podcast today.

This podcast is designed to provide accurate and authoritative information in regards to the subject matter covered. This is given with the understanding that neither the host, Practice of the Practice, or the guests are providing legal mental health or other professional information. If you need a professional, you should find one.

Do you know the different types of marketing and which one is best? How can you optimize your content for Google’s algorithms? Where are…