Have you ever considered running a practice with your partner? Would you like to know some of the challenges you might face and how to overcome them? Do you want to hear from a couple who has successfully built a practice together?

In this podcast episode, Whitney Owens speaks to Emily and Ryan Russ about running a practice as a couple. 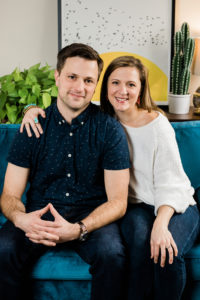 Emily and Ryan live in Little Rock, AR with their 3 young children and 1 Goldendoodle puppy. When Ryan was finishing up grad school at Reformed Theological Seminary in Jackson, MS 15 years ago, they knew one day they wanted to work together in private practice. After being on staff at Capstone Treatment Center, where Ryan received extensive training and certifications in Trauma, Sexual Addiction, Multiple Addictions, EMDR, Mindfulness, and Brainspotting, they nervously took the plunge into opening our own business.

Ryan’s main specialties are Sex Addiction, Trauma, Custom Intensives, and Custom Personal Growth Intensives for other therapists wanting to do their own therapy work. Emily’s specialties include administration, client hospitality, and juggling all the clinic details while raising 3 children and potty training a puppy. Client care and the “Art of Therapy” is at the core of their clinic, and they see their family-owned and operated clinic as more than a business, it’s a ministry.

The main challenge they both faced was fear and stepping into the unknown. Ryan was scared but felt prepared which really mitigated the fear. Emily felt that as a stay at home mom and wife, entering into their own business was a very scary and risky thing.

How Emily & Ryan Came To Working Together & The Misconceptions They Had

I really underestimated what she could pull off.

Ryan thought that it would primarily be him doing most of the work and Emily would help out occasionally but she ended up taking on a huge role and really helping the business a lot.

Try to schedule specific times to discuss work. It is important to be able to switch off at home after a long day. Emily and Ryan have decided to try out a working lunch date once a week to try and maintain a good boundary between work and home life.

Benefits of Working with Your Partner

The Importance of Communication

It’s important to be able to say ‘This is OK, or hey this is working for me, this isn’t working for me. Because one practice might do something one way and then you’re doing it a different way because that’s the way that works for you’.

How To Market a Christian Practice without Pushing People Away

The copyrighting on your website is very important. You want to portray Christian concepts without being overtly Christian. People tend to be afraid of counselors judging them. It’s important to convey the message that you are safe and non-judgmental.

Welcome to the Faith and Practice podcast. I’m your host, Whitney Owens, recording live from Savannah, Georgia. The purpose of this podcast is to help you start, grow, and scale a private practice with a faith-based perspective.

It’s amazing. On my website, I have people that call, and they say, yeah, I was looking for a Christian practice and I saw your website. And it makes me laugh because there’s nothing on the website that says we’re Christian. Yeah. It’s just the way that we talk on the website that makes people get the impression that we’re Christians, and that draws in faith-based and not faith-based.

[RYAN]:
Yeah. And for me, I think it comes down to trust. A lot of Christians have this fear of counselors being some lefty liberals that are going to brainwash them. And I think a lot of people have been turned off by judgmentalism in the church, and I don’t want at all for people to not choose us because they think we’re going to be judgmental. If anything, Christians should be a compassionate and understanding type of person. So, it’s a weird, nuanced message to send where you want to tell people, we’re safe. We’re not going to automatically tell you to divorce somebody right off the bat. But at the same time, we’re not judgmental. So, I guess it’s just a matter of dealing with polarized opinion. [WHITNEY]:
Yeah, I think over time, people are going to see that about you and your practice, that the more clients you see, you’ll get a reputation in town for not being the uber-duber Christian practice, but for being Christian in a way that is comfortable for people. I mean, it’s great because there are some practices, even in my town, that have a very strong biblical background in what they’re doing, and that does meet the need of a certain type of client. But for the types of clients we want to see, you know, they would be turned off by that. And so we’re gaining this reputation of, we’re a practice that is faith-based, but not throwing a Bible over your head and people feel really comfortable coming through the doors and they do see that compassion without judgment. And so, you know, Ryan, I think you probably portray that with your clients based on my relationship with you. I’m sure you’re giving them that and over time, people are going to see that compassion come out of you. [RYAN]:
Yeah, and that’s how I have integrated it. Basically, just who I am, it kind of exudes that. And I will reference scripture, but I’m always careful not to misuse it, because I think so much harm has been done where scripture has been used or abused in people’s world, but I’m going to authentically be myself. I like the work of Irvin Yalom, and he talks about existential psychotherapy, about having radical honesty with your client, so I’m not going to shy away from it. I will let people know my views as a Christian and hold space with them and allow them to, if that offends them or not, to work through it. So, I’m not gonna hide that. So, anyway. [WHITNEY]:
I love that you’re a Yalom fan. Like if I could sit down with anyone and have a conversation, it would be Irvin Yalom. So maybe I need to ask him to come be on the podcast. [RYAN]:
Oh, that’d be… Yeah, I love him, love his work. [WHITNEY]:
Definitely. Well, I ask everyone this and you can each take a turn answering: what do you feel like all Christian counselors need to know? [RYAN]:
I think, don’t be afraid of your faith. Don’t be afraid of your values. Go ahead and unashamedly, unapologetically, be yourself. I find that I have had fear of that and the fear of offending, to the point where I’ve left it out at times, and I’m not being fully me. So be who you are in your faith. And don’t be ashamed of that. [EMILY]:
I like that. Well, I am not a Christian counselor. So, I don’t know that I can speak to that as well as Ryan can. Yeah, I think just come in with the understanding that what we’re doing here is… ultimately has eternal value, and it’s not just, let me just, you know, go into the session and make this money and make this person’s week better. But ultimately, it’s, this is eternal stuff that we’re talking about. And yeah, I think just come in with that mindset. And you know, I do that, I mean, I do intake calls, so I’m not doing the therapy, but I know that the people who are calling have eternal souls and eternal value, and when they’re coming to me, I’m their first contact, I’m there, they’re in crisis, they need someone to show compassion, and to help steer them in the right way. And so, when I’m talking to them, I have that in my mind. And so yeah, this is powerful work and to be a Christian in this line of work is a real calling and a privilege and oftentimes a burden because, you know, it’s heavy stuff and it’s eternal. It’s eternal work. So. [WHITNEY]:
Yeah, you said that so beautifully. And as I’m hearing you talk, I’m thinking about my assistant as well and she does the same thing; she gets on the phone with someone and she sees that, she prays with… prays for them in her mind, and helping them find healing is such a beautiful thing. Yeah. Well, guys, it’s been so good to have you on the show today. [RYAN]:
Yeah. Thanks so much for having us. It’s been great. [EMILY]:
Yeah, thank you so much. [WHITNEY]:
Yeah, well, thanks for your time and being here. [EMILY]:
Okay, we’ll talk to you soon. [WHITNEY]:
Thank you for listening to the Faith in Practice podcast. If you love this podcast, please rate and review on iTunes or your favorite podcast player. If you liked this episode and want to know more, check out the Practice of the Practice website. Also, there you can learn more about me, options for working together such as individual and group consulting, or just shoot me an e-mail whitney@practiceofthepractice.com. We’d love to hear from you.

This podcast is designed to provide accurate and authoritative information in regard to the subject matter covered. This is given with the understanding that neither the host, the Practice of the Practice, or the guests, are providing legal, mental health, or other professional information. If you need a professional, you should find one.

Have you ever used or considered using Instagram to market your group practice? What are some common mistakes that group practice owners make with…