What can help someone truly cope with immense grief? How can you get past the early death of a parent? What can you do to sustain yourself in healing?

In the fourteenth episode of the How I Got Through It series, Joe Sanok speaks with Ashley Mielke about how she got through her father’s suicide.

Is managing your practice stressing you out? Try TherapyNotes! It makes notes, billing, scheduling, and telehealth a whole lot easier.

Check it out and you will quickly see why TherapyNotes is the highest-rated EHR on TrustPilot with over 1000 verified customer reviews and an average customer rating of 4.9/5 stars.

You’ll notice the difference from the first day you sign up for a trial. They offer live phone support 7 days a week, so when you have questions, you can quickly reach someone who can help, and you are never wasting your time looking for answers.

If you are coming from another EHR, they make the transition really easy. TherapyNotes will import your clients’ demographic data free of charge during your trial so you can get going right away.

Use promo code ‘JOE’ to get three free months to try out TherapyNotes, no strings attached, and remember, telehealth is included with every subscription free. Make 2022 the best year yet with TherapyNotes. 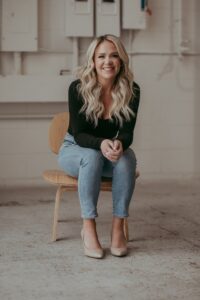 Ashley Mielke is a Registered Psychologist, Founder, and CEO of a large group private practice in Alberta, Canada called The Grief and Trauma Healing Centre Inc. She is passionate about supporting heart-centered practice owners in starting, growing, and scaling their businesses.

Ashley was called to start her company after the tragic death of her father by suicide in 2010. It was the purpose she found through her healing that inspired the ‘WHY’ that drives her 7-figure company today. It brings Ashley great joy to support other heart-centered leaders in building successful practices that are aligned with both their business goals and their deepest calling.

Ashley’s father had always struggled with a drugs and alcohol addiction. Her earliest memories of him included the addiction, and it had been painful ever since.

In her adult years, Ashley and her family celebrated her father’s 45th birthday and went to a 12-step meeting afterward, but it felt like a lost cause.

Very quickly I realized that my dad was not present … from my perspective, and [he] could care less to be there. So, I began to cry during this meeting with the sense that I had lost my dad. (Ashley Mielke)

A few weeks after this meeting, Ashley called him to express that she would no longer have him be present in her life because it was too painful to watch him suffer and hurt himself.

Two months later, Ashley received a phone call from her father’s fiancée that he had attempted to end his life.

I remember feeling … tunnel vision, like the walls were closing in around me, and I couldn’t believe at that moment that my worst nightmare had come to pass. (Ashley Mielke)

After her father’s death

After her father had died, Ashley immersed herself in her studies and work. She began to withdraw and isolate herself, and spent a lot of time alone in her grief.

I would be crying myself to sleep at night, crying in the morning when I would wake up, crying in the shower, crying on the drive to work, and then I would put on my happy face and just do what I had to do to get through another day. (Ashley Mielke)

For a long time, Ashley’s father’s death was on top of her mind, and she struggled to figure out how she was supposed to move forward and heal beyond the loss.

Once Ashley began working in private practice, many grieving people were referred to her.

I almost became the “grief person”, and I came alive, sitting with those clients. It felt like I finally was connecting with people who knew the pain that I felt. I could listen to their stories and I felt such tremendous empathy for them, and I wanted to hold space for them and remind them that they were not alone. (Ashley Mielke)

Ashley could hold space for these clients, but she knew that she needed more tools to help both them and herself. She began to research grief programs and certifications that were available.

Ashley’s advice to her past self

Remember that God is always working for your good. Everything that is going to happen in your life will shape your character and give you the gift of compassion and empathy for others.

Useful Links mentioned in this episode:

Check out these additional resources:

Should you be a LLC? I have a PLLC (Professional Limited Liability Company). It is only for specific professionals and raises the level of…