What is the difference between a media advisory and a press release? How should you prepare for TV news or newspaper interview? What should you consider in your pitch when trying to get media attention?

In this podcast episode, Alison  Pidgeon continues the interview with her husband Dave Pidgeon, an expert in the media and public relations, discussing some tips for getting media attention for your practice. 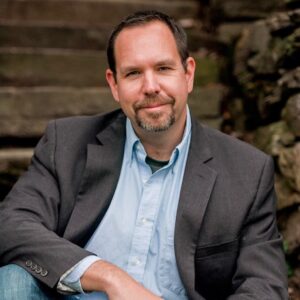 Dave Pidgeon is a media relations and crisis communications professional, serving both private and public sectors for about a decade. He currently is director of public relations for Pennsylvania’s State System of Higher Education, which oversees policy for 14 public universities and about 96,000 students. His media career began as a journalist in 2001, leading to a decade of work in newspapers, magazines, and television news management.

Dave transitioned into a spokesperson role for Norfolk Southern Corp. in October 2011, covering media markets in 16 states for the Class 1 railroad for about five-and-a-half years, managing messaging strategies and crisis communications for the Fortune 500 company. He then moved to the Bureau of Public Health Preparedness in the Pennsylvania Department of Health as deputy director of communications, before transitioning to his current job.

A media advisory is a good idea because it acts as a teaser for the reporters, only giving out small bits of information, meaning that they would need to attend your event to get the whole story. This advisory would be quite short and only contain information such as the time and place of the event, and maybe a few teaser questions that would draw the reporter’s attention and make them want to come out and cover your event. Send this out a couple of times, first a few weeks before your event, and then follow up a few days later with a personal note to make sure it gets noticed.

In line with the timing of your event as discussed in part 1 of this interview, it would be helpful to send out a reminder the day of your event, just in case there are a few other events on the same day and yours might not be in the front of the reporter’s mind. News reporters often make decisions quite last minute regarding which events to attend and do not necessarily plan well ahead of the time, so they would appreciate the follow-up. Be wary of annoying the reporter by following up too many times as you do not want to scare them off.

A press release would be more appropriate if there is information that you, as a practice owner, wish to share with the media after the meeting or event has taken place. This would be a longer piece with more context, explanations of the information discussed or revealed at the event, and allows you to build the narrative from the start as opposed to the reporter coming out and covering the event from their perspective.

Owned media and earned media are the two places that you have at your disposal where you can “tell your story”.

These are things such as your website, your social media platforms, and your blog which you own and on which you control the narrative. It gives you an incredible opportunity to reach your target market with your own voice.

If you were to offer your story or your expert advice to the reporter as an alternative to paying the very high prices for TV advertisements, you would get the valuable exposure but pay nothing for it, hence the term ‘earned media’. If, for some reason, you were unable to get the earned media attention from mainstream media, you always have owned media to fall back on and reach your target audience.

When a reporter (or someone posing as a reporter) contacts you with an offer for them to write or cover your story, but you have to pay for it. Thanks to owned and earned media, you do not need Pay to Play, so Dave warns against it and says you should avoid the scammers. Instead of spending lots of money on a Pay to Play situation, rather put that money towards a better cause, such as ads on your social media or hiring someone who would handle all the necessary branding for your practice.

Interviews are a skill like anything else, so forgive yourself if the first couple of times you do it, it doesn’t go exactly how you wish it would.

While presenting yourself as a mental health expert or representing your practice or event on TV news, you might need some tips on how to sound good and look good on camera.

Newspaper reporters allow you to go more in-depth with your story using both objective and subjective information.

Generally, objective information does not need to be quoted by the reporter, so when they’re looking for a quote from a mental health expert and they come to you, they’re most likely looking for a subjective quote to add some color to their story.

What to pitch when looking to get media attention

It’s a value proposition. Think about what it is you want to say and share and why that matters to their audience.

The world of media is fast-paced and very demanding, so remember that while you want access to their platform to get attention for your practice, they need to know if it is worth their time and energy to interview you and to build that relationship with you.

[ALISON]:
Welcome to the Grow a Group Practice podcast. I’m Alison Pidgeon, your host. Today, we are interviewing my husband, Dave Pidgeon. This is part 2 of our interview, so if you missed part 1, definitely go back and listen to that. We are continuing our conversation with him about how to get media attention for your practice. Dave has the experience of both being a reporter in his former work life, and now he works in public relations so has seen both sides of the media and has lots of great tips to share. So, today in our interview, we talk about, you know, what to do if you get an on-camera interview, how do you make sure you’re prepared. He talks about Pay to Play journalism and what that means. So, lots of great tips in here if you are interested in getting some media attention for your practice. And then, at the end of the interview we do kind of a lightning round of some fun, kinda more personal questions that I ask him about himself, and I ask him about me, and we have a lot of fun with that. So, if you want to kinda hear a funny, more personal conversation, definitely listen to the end. And I hope you enjoy my interview with Dave Pidgeon.

Hello, and welcome back to the Grow A Group Practice podcast. This is Episode Two with my husband, Dave Pidgeon. He is an expert in the media and public relations. Hi Dave.

So, I guess you could tell from listening to the interview, we had a lot of fun recording and I am really thankful that Dave is a good sport and was open to having me interview him. I hope you found all of that information helpful. I know, for me, you know, his advice for my own group practice to get media attention has been super helpful, like, I mentioned with getting clients, and you probably learned a little bit more about me and about us, I guess. So, we’ll see you all next time.