How do you bounce back from a set back that could potentially damage your business? Do you set time aside for those things that matter most? Are you surrounding yourself with people who can help you rebuild or push you to that next level in your business?

In this podcast episode, Joe Sanok speaks with Dr. Larry Beer about how he rebuilt his practice when people left and what he is doing differently now. 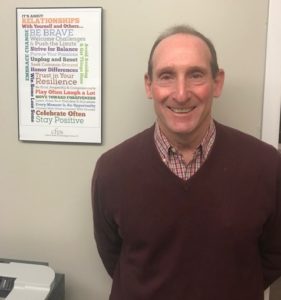 Dr. Larry Beer is the founder and president of Child and Family Psychological Services. They will be celebrating their 30th anniversary in 2019 and there are currently 43 licensed therapists on staff.
He is a licensed psychologist and licensed professional counselor who sees approximately 25 clients a week.

Dr. Larry is an adjunct assistant professor in the CECP program at WMU and a fellow of 2 divisions of APA and a former president of Division 51 (Men and masculinities)

In this podcast episode, Joe Sanok speaks with Dr. Larry Beer about how he rebuilt his practice after nearly 25% of the staff in his Kalamazoo office left.

We’re so focused on just building practices, I don’t know if we’re focused enough on what we do when what we’re building takes a hit from one thing or another.

This was really scary, I thought I was being a really good owner and tried to do the best I could to support them. I was feeling really hurt.

As Dr. Larry started questioning and wondering how this could have happened he had to go through a grieving process. On the flip side, however, there was this situation at hand which had to be dealt with whether he liked it or not.

Making a Group Practice an Appealing Place for People to Stay

I try to not take anything for granted.

It’s become easier for people to work independently, they don’t need the licensed psychologists like they once did. Part of being a practice owner is constantly evaluating how to make being at this group practice easier or more appealing than going out and starting their own business. With this in mind, Dr. Larry tries to not take anything for granted, he makes people feel appreciated and recognizes their efforts. By giving employees opportunities to be connected to the practice and connect with their colleagues.

Dr.Larry had to be really transparent by letting the other associates know what was happening and that he appreciated their loyalty. Now he is also finding really cool opportunities for the practice to participate in.

Its really important to remember that our work is there to support our life outside of work.

Dr. Larry values this highly and adapts his schedule so that he can spend quality family time.

Last week, I spoke all about how to understand the competition. Did you do the quick five minute exercise? Where We’re Headed In the…