Have you thought about how your health affects your life? What would your life look like if you were present daily in the lives of those who mattered most you? Are you confident enough to make decisions, but humble enough to know that it could be wrong?

In this podcast episode Joe Sanok speaks with Jon Vroman about living life in The Front Row, what it takes to be a Front Row Dad and being your true self. 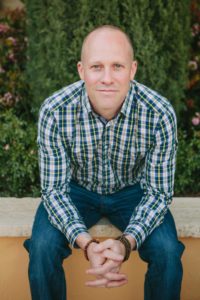 Jon Vroman inspires others to Live Life In The Front Row™ by teaching the art of moment making. He is an award-winning speaker, #1 bestselling author of The Front Row Factor, podcast host and founder of Front Row Foundation, a charity creating front row experiences for individuals who brave life-threatening illnesses. In and amongst all of this he also started Front Row Dads.

Jon had an executive position wherein he was making great money and was ultimately living a great life, but something was missing. This something was contribution, giving back and making a difference. Because of this,  Front Row Foundation came about as a side gig.

After 3 years of doing this he realized that he wanted to commit more of his time to this side gig and because he still had a 9-5 it was a bit difficult. He decided to take the leap and started his own business.

In this podcast episode, Joe Sanok speaks with Jon Vroman about living life in The Front Row, what it takes to be a Front Row Dad, being your true self and how being a healthy version of yourself can benefit everyone around you.

Self Improvement and Health

When you have your health you have 1000 dreams. But when you don’t, you have but one.

Working with people through the charity for 13 years who are fighting for their life, Jon has a great level of respect for health. For him, to be a Front Row Dad you’ve got to put your health first.

What Makes Up A Front Row Dad

We can’t know everything, but we can know something and that something can change anything.

You’ve got to be confident enough to make decisions, yet humble enough to know that those decisions could be wrong and that you need to pivot and learn something new.

I recognize I get a lot further by leading the way with my actions.

When Jon learns something and he brings the information back home he makes sure that he doesn’t come in and tell everybody how things are going to change, but to actually just do things himself that are different.

Watch Some of Jon’s Talks Here

Other Books mentioned In This Episode

a new way of lifeconfidencehow to change your lifelifestyleWork life balance

Sitting at the office all day can be a challenge for me, so I want to be as comfortable as possible. Not only are…