Have you ever wondered how conferences could be more diverse and exciting? What are the challenges when creating a conference? How can you keep the interactive element with a virtual conference?

In this podcast episode, Joe Sanok speaks to Curt Widhalm and Katie Vernoy about their new and fresh type of conference called Therapy Reimagined. 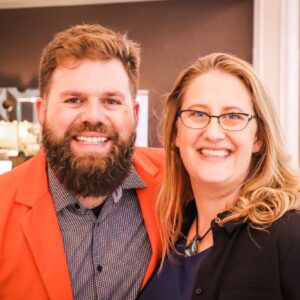 Curt Widhalm and Katie Vernoy are the co-hosts of the Modern Therapists Survival Guide Podcast and the founders of the Therapy Reimagined Conference.

Listen to their podcast here.

The idea to reimagine therapy and conferences

Curt and Katie’s idea for this revolutionary approach to therapy and conferencing began at a conference a few years back, where they noticed a lack of diversity in the speakers and the content of their talks, to the point where it was extremely boring and repetitive. They realized the need for a new type of conference which focused on the impact of therapists themselves on therapy outcomes as well as addressing new, fresh issues in a way that is interesting, interactive, and accurately represents people from more diverse backgrounds.

Getting speakers on board

Curt and Katie wanted an in-person event with audience engagement, so they reached out to a bunch of fellow therapists and consultants who they thought would enjoy this more interactive format and might be willing to speak at the first conference in 2018. They brought in Kelly Higdon and Miranda Palmer to speak about the business side of things, Dr. Ben Caldwell to speak about the state of the profession, and Ernesto Segismundo to talk about social media. They were set with 6 speakers, including Curt and Katie, but needed some more, so they reached out to colleagues from around the US, specifically those who are underrepresented and could bring more fresh and diverse topics to the stage. The prospect of this new and exciting conference generated a large buzz in the therapist’s community which led to a surprisingly great turnout for the first Therapy Reimagined conference.

The format of the first conference

Focusing on making their conference more interesting than most of the others on the circuit, they wanted to ensure that the talks and activities were all experiential and under 90 minutes, which they called “thought bubbles”. This created more time slots for a conference of the standard length, so they were able to bring in more speakers and cover more topics.

Thanks to the buzz created by their call for speakers, they received about 90 applicants, some of whom were eager to go even further than the conference and get involved with the whole movement of reimagining therapy. “It’s just so humbling to see people come together like that and create this community that wants to kind of disrupt private practice.”

Tips from the first year to improve the second year

Monetizing the conference by creating a community

The idea is, let’s really nurture the financial stability and the quality of our profession by putting these kinds of relationships in place and really supporting them in how we set up the conference.

They really want the conference to be accessible and therefore affordable, but still, be able to cover all the costs. They have managed to partner with a bunch of sponsors, including brands and people that Curt and Katie truly value and want to showcase, and have created a wonderfully interwoven community of sponsors, speakers, and attendees.

This year’s conference will be taking place on September 24th, 25th, and 26th. The keynote speakers include:

[JOE]:
Between writing notes, filing insurance claims, and scheduling of clients, it can be hard to stay organized. That’s why I recommend TherapyNotes. Their easy-to-use platform lets you manage your practice securely and efficiently. Visit therapynotes.com to get two free months of TherapyNotes today. Just use the promo code JOE when you sign up for a free trial at therapynotes.com.

I loved this episode. Oh my gosh, it’s all the behind-the-scenes of the Therapy Reimagined conference. Curt and Katie, you know, started that a couple years ago, and they talk through it, they talk about why diversity mattered – not mattered, it’s not past tense, why it matters – they talk about all sorts of kind of behind-the-scenes of doing a conference, and maybe you want to start a conference. Literally, I just started doing conferences, you know, in, I want to say it was 2013/14, when Kelly, Miranda, and I put on the Most Awesome Conference. It’s something you can do. You can dream it up. You can build an audience, you can partner with people, there’s so many ways that you can do this. And Curt and Katie talk through how they were just sick of terrible conferences, and what did they do? They started their own. So, without any further ado, here is Curt and Katie.

You know those people that just reek of awesomeness? I just had to interview Bob Jackman, MS, LCPC! We met at the American Counseling…