Do you know what your story is? Do you want to share it with the world? How can storytelling benefit you?

In this podcast episode, Joe Sanok speaks to LaToya Smith about storytelling and public speaking. 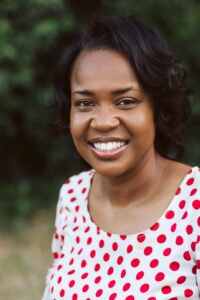 Can you hear us?

In collaboration with Practice of the Practice, LaToya ran the “Can You Hear Us” webinar which featured five black leaders coming together to share their personal stories of how they dealt with racism. Hearing their stories and voices was amazing and really special to LaToya. It’s one thing to read these stories but to actually see the pain in their faces and hear it in their voices allows you to connect more emotionally. That is the power of story… we may have different experiences but you can connect to the emotion.

The importance of storytelling to LaToya

I’m feeling like a superhero almost, because I can own what I’m saying, and it’s mine, and I’m in control of this narrative. And I think so many times in life, if we just sit back and say nothing, everybody else controls the narrative but us.

LaToya started Strong Witness because she had a story inside of her that was bound up for years and it created a lot of pain and struggle. Once she started telling her story, she realized that it was the easiest thing and she wishes that she had done it years ago so now she wants to help other people to share their stories. Story has always been in LaToya but she didn’t know how strong it was and didn’t fully embrace it. Shifting and understanding how powerful story is has become a bigger part of LaToya’s story and is now a part of her vision.

Theories are important but she would rather hear somebody’s story because that is what’s going to help her connect. LaToya realized how important storytelling was to her when she saw the power it has. When she begins to speak, it brings so much power and ownership that she wants to tell the story over and over.

As soon as you say the words ‘recorded’ or ‘live’ this nervousness or sense of anxiety falls over people. A little bit of nervousness is good because it means that you respect what you’re doing but it can sometimes be crippling and almost paralyzing.

We’re made of stories, we’ve been telling them all day long since we were kids. The way that we should communicate in presentations should be the same way, especially when you’re passionate about a topic. You want to be able to get to a comfortable place that is like talking to your friends, not being an authority with the goal of perfectionism.

I can listen, I can read your bullet points and you can tell me the end result but if you give me the story why you’re doing it, now I’m locked in, now you’ve connected to my emotions, now I want you to win.

We get captivated by stories we’re drawn in to but people are also drawn into us. Nobody can tell your story like you because you know your why, you know the struggle, you know what you want to convey and the idea of a story gives your vision greater meaning.

LaToya was nervous because she had never done this before and it was a really heavy topic. It was Child Abuse Prevention and Sexual Assualt Awareness Month and she began to reach out to people in her community to share their experiences related to that. These people told the part of their story that was most important to them and felt so liberated, not knowing before that they could tell their stories like that. Even the people listening were able to connect with them and had a new respect and greater understanding of these issues, even if they weren’t victims themselves.

Prepping your brain for the storytelling webinar and Killin’ It Camp

Register here for Online Storytelling: How to rock out FB Live, social media, and online presentations with LaToya Smith

[JOE]:
There are so many ways to keep your practice organized, but TherapyNotes is the best. Their easy to use secure platform lets you not only do your billing, scheduling, and progress notes, but also create a client portal to share documents and request signatures. Plus, they offer amazing, unlimited phone support so when you have a question, you can get help fast. To get started with the practice management software, trusted by over 35,000 professionals, go to therapynotes.com and start a free trial today. If you enter promo code JOE, they will give you two months to try it out for free.

Well, today’s episode is part of a series all with Killin’It Camp speakers. So this year Killin’It Camp is going to be completely online, we have over 20 speakers, we have it all getting recorded – assuming the technology doesn’t act silly on us – and we have some killer deals from TherapyNotes, Brighter Vision, and other folks during Killin’It Camp. So in early October, we are going to be having Killin’It Camp, and you can come live to those, or if you get a ticket and you want to just pop in pop out, they’ll get recorded for you as well. And so for only $95 you can get access to all of these speakers, all of the recordings, all of the bonuses, gotta head on over to killinitcamp.com. These are just a couple of the speakers that I’m having here on the podcast, but we’re having over 20 speakers, it’s gonna be amazing. We have three tracks. One track is called Pillars of Practice. These are short form, Ted Talk type talks that are 25 minutes long. They’re on very clear, particular things of private practice. The other types are 55 minutes long and those are how to scale a practice. So that’s gonna be all around group practices, and expanding, and scaling your practice. And then we also have the multiple streams of income track. And the thing about this is you don’t have to choose between the tracks. We’ve set it up that only one session is going at a time. We have one login that you can pop in, pop out wherever you can catch the talks. So we really want it to be accessible to you. Again, it’s only $95. So head on over to killinitcamp.com, and you can learn all about the speakers that will be there; we can’t wait for this. So without any further ado, here we go.

Now, what do you think gets in the way, like, you’ve coached people in storytelling, you’ve helped people with Strong Witness do well, you coached the people with the Can You Hear Us. When you coach people, when you talk to people, what are the typical hang ups? What do they freak out over and they’re like, oh, my gosh, I can’t do that? What are typical mindsets that get in the way of good storytelling, good public speaking, and all of that?