Are you in the process of creating a logo for your business, or perhaps you’d like to redesign your current logo? Are you wondering what sort of style would work best for your logo?

In this podcast episode, Sam Carvalho speaks about letter logos, the different types, and how effective they can be.

TherapyNotes! It makes notes, billing, scheduling, and telehealth a whole lot easier. Check it out and you will quickly see why it’s the highest-rated EHR on TrustPilot with over 1000 verified customer reviews and an average customer rating of 4.9/5 stars.

To get 3 free months of TherapyNotes,  no strings attached including their very reliable telehealth platform click on www.therapynotes.com and enter the promo code: Joe

Letter logos, also called letter mark logos, are basically monograms, but they’re monograms with a purpose: they represent you to the world.

Alphabet letter logos are typically based on the name of the company, for example if your name starts with an S, your logo will more than likely incorporate an S. However, it doesn’t just have to be the letter S. Apart from choosing a typeface that fits your aesthetic and your message, there is a lot of room for creativity. The letter itself can easily become a logo image, with a little experimentation.

Designer Michael Ian Kaye once said: What a graphic designer tries to do is make sure the typography is emotionally consistent with the brand.

One way to go about a single letter logo is to modify the letter to look like an image. This has to work on two levels, both as the letter itself and as a picture, without detracting from the letter. After all, you want to communicate clearly who you are. Another method is to look at the negative space within the logo. Creating a logo with negative space can allow you to use that space as an image in itself. Of course, if you wanted to go the more traditional route, single letter logos lend themselves very well to the monogram look. They look dignified and can stand alone, or be placed on top of a shape, or banner.

Two letter logos lend themselves to more variations, simply because there is more space to work with. Merging the letters allows you to share strokes, keeping the size of the logo to a minimum. You can also adapt this method by interlocking letters, instead of overlapping them. This is easier to do with letters that have curves. Mirroring your letters also contributes to a unified look. This works either with letters that are already mirror images of each other, for example: D & B or W & M, or if you have the same letter multiple times. Negative space, once again, can be used to great effect.

Three letter letter marks, although less common than the other two, look like more traditional monograms. This can include keeping the same font for each letter, but making the middle letter another third or so bigger than the other two. For these types of logos, choosing a basic, but bold sans serif font usually works best. Think about the HBO logo, for example, which is a very bold block font with a target or camera eye within the negative space of the O. Since three letters give you more opportunity for balance, a popular logo choice is to confirm the other edges of the letters to an overall shape, such as a circle. This gives your logo a sense of completeness. You could also opt for a different color of just one letter, or one portion of a letter to make each letter stand out. 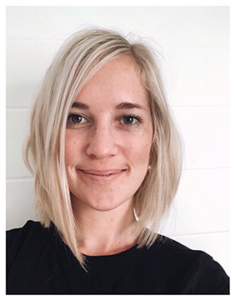 Sam Carvalho is a graphic designer living in Cape Town, South Africa, with over five years of experience in both design and marketing, with a special interest and experience in the start-up environment.

She has been working with Practice of the Practice since 2016 and has helped over 70 therapist entrepreneurs take their practices to the next level by enhancing their visual branding. She loves working with a variety of clients on design-intensive tasks and is always up for a challenge!

Follow Sam on Instagram to see some of her work. To work with Sam, head on over to www.practiceofthepractice.com/branding.

This is a question I wrestled with for a number of years. Both in my private practice, as well as agency work. When is…