How did you launch your big idea to empower women? What business mindset shifts need to happen? How do you understand your ideal target market?

In this podcast episode, Joe Sanok speaks with Veronica Cisneros about launching her big idea from Slow Down School.

Marketing your practice on Facebook, LinkedIn and Twitter is one of the most powerful things you can do to attract new clients.

However, deciding what to post, where to post, and when to post all on your own is extremely time consuming and takes time out of the day that you could spend seeing clients.

As the industry-leading company that makes marketing simple for therapists, Brighter Vision understands this and has developed a solution.

With Social Genie, Branding & marketing your private practice on social media has never been easier. Social Genie has a library of 1,000s of social media posts that you can edit, customize, and schedule across all platforms in a matter of minutes. Just choose your specialty and click Go, and all of your social media posts can be scheduled out for months at a time. And if you add your logo and website, Social Genie will automatically add it each post so your branding is front and center to prospective clients.

For a 14 day free trial, head on over to www.brightervision.com/joe. 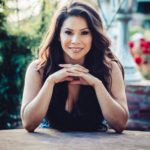 Veronica is a licensed marriage and family therapist, motivational speaker, mother of three and wife of her beloved husband of 20 years. Through personal experience, she has defeated life’s challenges by leaning into fear unapologetically. She’s taught hundreds of women how to take ownership of their lives, lean into fear and let go of judgement. However, this is not a big enough impact and she learned to empower the millions of women worldwide who suffer. She focuses on creating true change, encouraging women to no longer compromise themselves in order to meet the needs of others.

In this podcast episode, Joe Sanok speaks with Veronica Cisneros about launching her big idea that helps women become empowered and unapologetic.

Veronica was in a phase of being stuck and allowing self-doubt to control her. She thought she had to follow everyone else’s path and stay in a little box. For her, that meant working in a hospital and earning very little. She was stuck in the mindset of “this is how it’s supposed to be” with her insecurities telling her that she had to stay in the job as she couldn’t make it on her own.

Fast forward to when she started listening to Joe’s podcast right from the beginning and she slowly started considering the idea of doing something different. But it was a consulting phone call with Joe that really helped her make the switch and encouraged her to do something outside the norm.

When did the big idea take shape for you?

Veronica joined one of the Practice of the Practice mastermind classes which is where she realised that there are other clinicians out there doing great things and doing things that aren’t what they’d been trained to do. As therapists, we can impact so many more people when we step out of my comfort zones. Veronica took a step back and considered what it is that she really wanted to do. That was to work with women and empower them.

Why do you care so much about empowering women?

She was there where most of her clients are. With one month away from a divorce, she thought “what am I going to do?” Her titles and roles of being a mother and wife were being stripped and without them, she needed to answer the question “who am I really?”

Now in her practice, she sees women at this extreme level of anxiety and depression and wants them to know that they don’t need to suffer silently. She thought that she doesn’t want to wait until they’re at that point. She wanted to catch them before they really need therapy and empower women from all over.

How did you start to understand your ideal client?

Veronica says she really had to listen. She knew what she needed when she was going through her own struggle. But then coaching with Joe helped challenge her to really listen to the audience and take actions to do so. By starting a Facebook group and reaching out, she was able to listen and ask questions.

Slow Down School helped enormously in the creative process. It truly allowed her to connect with what she’s meant to do in life. All these ideas started coming to her during this time out. She was really filling up the journal with all these ideas.

The joy of slow down school is that it pulls you back so that you are better able to reengage and allow ideas come to the surface.

When she got home she was able to go ahead with a game plan. And was able to implement everything and take action.

Take the leap and step into a level of vulnerability. Take in a new life. Don’t stay on the hamster wheel. Embrace the voice that’s telling you to do something different.

[JOE]: The work that you do as a therapist is important and your private practice deserves the best website possible to allow you to see more clients. As the industry leading company that makes marketing simple for therapists, Brighter Vision understands exactly what it takes to help your practice grow to new heights this year. Brighter Vision’s team of developers will work with you to first understand your business and what makes it unique then use this information to build you a website centered around attracting and retaining your ideal client. Best yet, there’s never been a more affordable time to get the website your practice deserves. During the entire month of January, Brighter Vision is running its biggest sale of the year until the end of the month. Pay no set of fees and get your entire first year for just $49 per month. That’s like savings of over $200 on your first year with Brighter Vision. To take advantage of this offer, simply go to brightervision.com/Joe. Again, that’s brightervision.com/Joe.
I am so excited about today’s episode. I hope that your new year is going awesome. However, you celebrate the holidays, I hope that went amazing for you as well. Just keep up the work. 2020 is going to be amazing, find the, excuse me, that cough. Anyone that’s been watching my Facebook lives, you know that cough has been holding on. Keep doing things that take you to that next level. You know, Veronica, our guest today is a perfect example of that. She reached out to me when she was working in a hospital and she’s going to talk about that story and how she now has a group practice, she also has a consulting business as well, and she is launching a podcast. She’s one of our Done For You podcasters and was just a superstar at Slow Down School this summer.
Slow Down School was an amazing event that I host at the end of July where people fly into Northern Michigan and we slow down together, we go hiking, we get massages, we have a yoga teacher come in, we have a chef that cooks for us and we hang out in the beaches and let our brains rest. And then the best use of our time rises to the surface. And then Wednesday, Thursday and Friday morning we run full tilt. And you know, Veronica is someone who really pushed our group to just live unapologetically. I love how her business Empowered and Unapologetic is just such a unique business because you hear that word empowered a lot, but I don’t think that anyone really lives it out as much as Veronica. She and I had some time after Slow Down School because her flight was a little bit later and she, and Christina and I all hung out and we went wine tasting and then we took her to the airport and you know, she lives this life that is unapologetic that many women and some, and a lot of men I think, struggle with and she does such a great job of just living that out through her podcast and through her business.
Well today on the Practice of the Practice podcast we have Veronica Cisneros. Veronica is a licensed marriage and family therapist, motivational speaker, mother of three and a wife of her beloved husband for almost 20 years. Through personal experience, she has defeated life’s challenges by leaning into fear unapologetically. She’s taught hundreds of women how to take ownership of their lives, lean into fear and let go of judgment. However, this is not a big enough impact and she learned to empower the millions of women worldwide who suffer in silence. Veronica focuses on creating true change and encouraging women to no longer compromise themselves in order to meet the needs of others. Veronica, welcome to the Practice of the Practice podcast.

What can you do in the continuous movement against systemic racism? How can you move through painful realizations about yourself and still keep on…